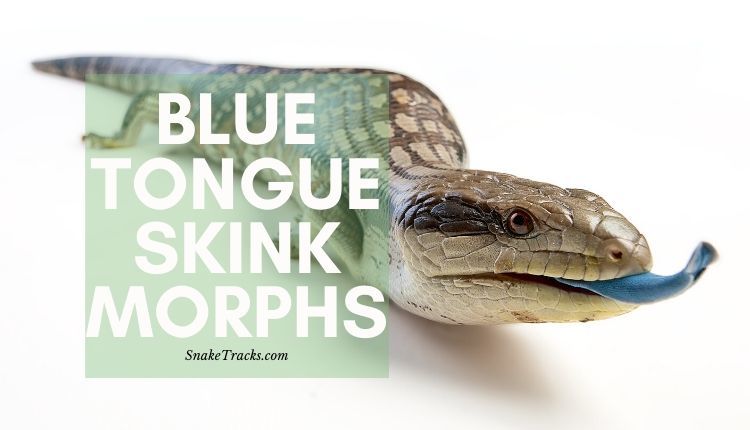 A morphism is a result of a mutation that alters the appearance but not the species or breed.  Who doesn’t love genetic anomalies that create such unique blue tongue skink morphs.

Mutations do occur in the wild and need to, but unless they are an adaptive plus, the animal will quickly be predated.  An animal created by a breeder doesn’t need the patterns in a color that camouflage it from predators, but on the other hand, choosing which animal mates who, based on color combinations, also increases the overall strength and longevity of the lines.

There are at least two ways to define “morph” in reptiles. First usually refers to visual traits that make an animal look different from the classic wild-type seen in nature. Some such as albino, anerythristic, hypo/hypermelanistic, or axanthic traits are simple genetic which can mean recessive, co-dominant, sex-linked, and much more, meaning that there is part of a gene or one gene, in particular, that has an influence on the visual trait that the animal displays. These simple genetic traits are what most would call “morphs.”  Secondly, there are the polygenic traits which are also known as the line-bred animal. These are produced by breeding animals with similar desired visual traits to each other to create a higher concentration of the genetics that produced their “look.”

All blue tongued skinks belong to the genus Tiliqua, which comes from either Australia (Tiliqua scincoides) or Indonesia (Tiliqua Gigas). As follows, we will look at the most relevant and popular morphs.

They are endemic to the island of New Guinea and other various surrounding islands. They are found typically in the rainforest thus, in captivity, they require high humidity.

Classic Indonesians are identifiable by their earthy yellow or greenish coloring, speckling between bands, solid black forelimbs, and thin black markings on the head.

Indonesian blue-tongued skinks grow to around 19.75 inches in length (50 cm).

These can be distinguished by freckling on both arms and legs, distinct banding along the length of the body  and a salmon orange-colored belly with little to no freckling. They’re also accompanied by long tails (60–90% of their SVL).

Meruakes are good for beginners as they have a calmer disposition than other Indonesian species.

They are availablefrom  U$ 200 to U$ 350 at internet sites like https://www.morphmarket.com/us/c/reptiles/lizards/skinks/321607

Though they are the same subspecies as the Classic, Halmaheras are recognized as different because of their reddish coloring (sometimes gray) and thin black markings on the head. The easiest way to tell between a Merauke and a Halmahera is by looking at the belly; Halmaheras have a patterned black and white or black and pink belly.

Halameras are available from  U$ 200 to U$ 300 at internet sites like https://www.morphmarket.com/us/c/reptiles/lizards/skinks/321607

The Irian Jaya is blue tongue skinks, but they’re taxonomically incomplete at the moment.

They have a distinct pattern that can be described as one of the most beautiful among blue-tongued skinks and that consists of thick dark brown, sometimes black, stripes with a peachy gold to brown undertone. The bellies of these animals can range from creme to orange to even red.

IrianJayas are available at U$ 250 at internet sites like https://www.morphmarket.com/us/c/reptiles/lizards/skinks/321607

Kei Island blue tongues can be distinguished by their unique freckled appearance that extends to the head. They grow to around 19.75 inches in length (50 cm).

Kei Island skinks are available at U$ 375 at internet sites like https://www.morphmarket.com/us/c/reptiles/lizards/skinks/321607

Natural from the Tanimbar Island, these skinks are typically silver, gray, or yellow in color, and are known for producing large clutches of over 20 live-born babies.

They are known for their extremely hard and glossy scales, with a feisty temperament to boot, although captive-bred individuals are said to be much more tolerant of humans. However, they shouldn`t be kept as pets for families with children.

Western blue tongues are one of six species of blue-tongued skinks found in Australia, though further species are found in New Guinea and Indonesia. They are extremely uncommon as a pet, as is one of the rarer species.

Westerns are a large skink: they grow up to 20″ (50 cm) long. The body is wide and large in comparison to the size of the legs. Because of this, they are not an agile lizard, so their preys tend to be slow-moving. They feature a notably short tail, a bold black band behind each eye, and thicker banding along the body than seen in other species. The underside of the body is usually pale.

A remarkable fact about Western Blue Tongued Skinks is that they are listed as “Near Threatened” in Victoria, and “Threatened” in New South Wales.

They grow up to 24″ (60 cm) long and tend to have longer lifespans than other sub-species -up to 30 years-. Highland blotchies have yellow, orange and red blotches contrasting with a black background, while lowland blotchies tend to be much less colorful even if they have a similar pattern.

A curious fact about this morph is that it was identified as among the fossils in the Pleistocene fossil sites at Naracoorte Caves National Park, South Australia, proving that it has been around for at least 12,000 years!

They a very robust build morph, with a large head, a short body, and a slender tail. They grow about 15.5 and 17.5 (40 to 45 cm)  inches long.  Their body is a predominantly pale brown to grey with a series of nine or more orange-brown bands along the length of the body and tail. Their underside is pale cream to white.

Eastern skinks are also called common blue-tongued and grow about 19 inches long  (48 cm) and are the most common blue tongue skink in Australia. Like the Western, they feature bold dark bands behind the eyes, but the banding along the body is less distinct.

Northerns are the most popular blue-tongued skink species, having become very tame through generations of captive breeding. Northerns are also the easiest Australian species to find in the United States.

They are the largest blue-tongued: they can grow up to 24″ (60 cm) long and also tend to be the heaviest of all blue tongued skinks and are identifiable by a lack of banding behind the eye, yellow or orange oval splotches along the sides, and solid gray or beige forelimbs.

Kept properly, blue-tongued skinks can live for 15 to 20 years, and possibly longer.

Northern blue-tongued skinks range in price from $150 for babies to $250 for adults. High-colored or rarer forms may cost more. Rare blue-tongued skinks such as Centralian and Shinglebacks may cost between $1,500 and $5,000 each. Source:http://www.reptilesmagazine.com/Care-Sheets/Lizards/Blue-Tongue-Skink/

Northerns are also available at U$ 450 at  https://www.morphmarket.com/us/c/reptiles/lizards/skinks/321607

They feature distinctive armor-like bumpy scales, a dark, nearly-black tongue, and a short tail. It can be found in various colors, ranging from dark brown to cream.

Unlike other blue tongues, young are raised in family colonies, making the shingleback the only truly social blue tongue skink on this list.

According to Professor Michael Bull’s research, shingleback blue tongue skinks can live up to 50 years in the wild.

There are 4 known subspecies of Tiliqua rugosa:

Found only in the Mid North of South Australia,  is a species of skink in the family Scincidae.  The species was previously thought to be extinct and only rediscovered in 1992.

Pygmy blue-tongued skinks are the smallest and rarest of the skink species, measuring a mere 4 inches (10 cm) in length at the max.

Although blue-tongued skinks can be found in numerous varieties, sizes, and colors, this lizard species was at one time completely ignored by reptile and lizard enthusiasts. It has become extremely popular in recent years due to its distinctive berry-blue tongue, variability, and submissive behavior.

Thanks to these morphs, blue tongue shinks come with many beautiful patterns and colorations. With the proper care and a little love, you’re in for years of fun with a pet blue-tongued skink. Which do you think is the best blue tongued skink morph? Drop us a comment.

Other interesting videos available at: http://bluetonguemorphs.com/video/

A genetic masterclass from an Australian site: http://bluetonguelizard.com.au/blue-tongues/

Which blue tongue skink morph was your favorite? Let us know in the comments below!