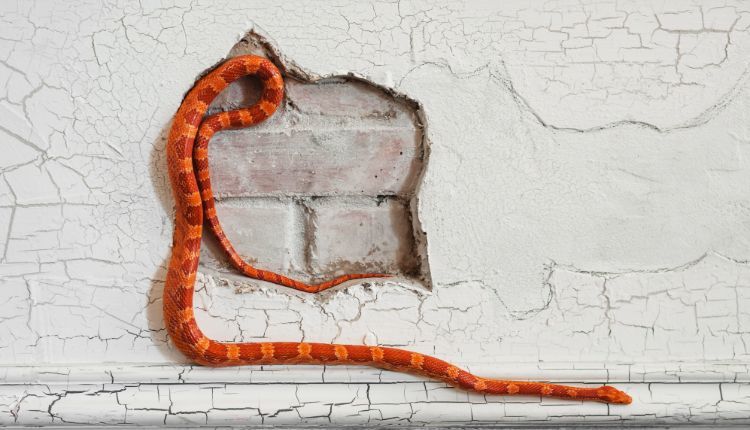 The answer is yes!!!  Some species of snake are excellent climbers and can climb walls and other man-made structures. Lightweight and fast-moving snakes, such as rat snakes and corn snakes are particularly good at climbing.

But there is a “but”: whether or not a snake can climb a wall depends on what the wall is made of.

Snakes normally can climb brick walls and stone walls but are challenged by smooth surfaces, without any crevices like concrete walls, plastered or wallpapered walls, glass or metal walls because snakes can’t “stick” to surfaces the way rodents and insects often can.

The only way a snake can climb a smooth surface is if there is something to cling onto.

How do snakes manage to climb walls?

A snake’s body isn’t sticky or tacky, therefore to climb a wall snakes need to wedge themselves into gaps and crevices, to avoid falling.

MARVI, H., and HU, D. from the Georgia Institute of Technology, conducted a combined experimental and theoretical investigation (available here: https://www.ncbi.nlm.nih.gov/pmc/articles/PMC3479897/#RSIF20120132C6) in which they measured the frictional properties of corn snakes, their body kinematics and the transverse forces they apply to channels of varying width and inclination.

They found out that snakes use a combination of ingenious friction-enhancing techniques, including digging their ventral scales to double their frictional coefficient and pushing channel walls transversely with up to nine times body weight.

They have also found snakes push up to four times more than required to prevent sliding backward, presumably trading metabolic energy for an assurance of wall stability.

MARVI, H. and HU, D clearly explained that anchorage in snakes relies on two mechanisms to augment friction: (i) transverse pushing against channel walls and (ii) the control of belly scales to grip the bottom of the channel, being the former an active mechanism requiring energy and the latter a passive structural means of achieving anchorage, whereby force is mediated by the snake’s weight.

According to MARVI, H., and HU, D these dual anchorage methods are necessary to overcome the challenges of climbing uphill.

On slopes of increasing inclination, anchorage via belly friction becomes less effective owing to the decreasing normal force between the belly and the channel bottom.

They concluded that snakes tend to rely upon belly friction when traveling on horizontal surfaces and transverse pushing when on steep slopes.

How high a wall can a snake climb?

It’s purely down to gravity and luck: the higher the wall, the less likely the snake is to reach the top. The longer the snake has to climb for, the bigger the chance to fall because of the possibility of loosing grip.

Stairs are a challenge to snakes; to climb stairs, snakes have to lift a portion of their body up and once the front part is up, push forward onto the step above it, repeating the process over and over.

To perform such an activity a snake has to have sufficient body length to be able to get from one stair to the next.

If the distance between two steps is let’s say 10 inches, and the snake is only 12 inches long, this would not be enough for the snake to be able to push up and maintain its body of the upper step for it to be able to pull the rest of its weight to the higher elevation.

As a good rule of thumb, a snake needs at least twice the body length in comparison to the height it wants to overcome.

As a general rule, snakes can climb walls -especially brick walls and stone walls- and in general any surface provided there is something to cling onto.

Besides luck and gravity, as MARVI, H., and HU, D from the Georgia Institute of Technology found, success is related to two anchorage methods snakes use to overcome the challenges of climbing uphill: transverse pushing in combination with belly friction.