If you suspect you may have snakes in your vicinity, then identifying the tracks can help you determine whether you genuinely have a snake in your vicinity or not. It is not uncommon for a snake to take up a habitat in your garden or yard.

And although you may not have seen the snake, you may have seen unusual tracks. If you are worried about a venomous snake or getting a snake bite.

Maybe you found a snake hole, snake feces, snake skin, heard something in the leaf litter, or any other indications of a possibility of a snake. Just to be safe, you should try to identify the snake tracks in case of venomous snakes.

Even if you have non-venomous snakes, identifying them might be fun to know what you have.

Animal tracks are a great way to identify them without having to put yourself in any real threat. So how do you identify snake tracks?

Unlike other wild animals, snakes don’t have feet or toes. This means you cannot identify them using paw tracks.

Regardless, snakes still leave tracks when they move. We will look at the five movements of snakes and the tracks those movements leave behind.

Snake Movements and the Tracks They Create

With concertina movement, the snake anchors part of its body to a surface and then pulls or pushes another section of its body towards or away from the part of the body which is anchored. The movement can be described as the snake bending its body and then straightening it out.

This type of movement requires more effort than lateral undulation or sidewinding. As such it burns more calories.

The tracks created show the snake bending its body together.

This is the most common movement type in snakes. Here the snake undulates laterally.

That is to say, the tracks formed are waves that bend from side to side. The waves of the movement travel from the head of the snake to the tail.

When the snake is in contact with an object in its environment such as a stone, plant, or stick, the portion of the body close to the object exerts a force against the object. The snake deforms locally around it.

If the snake is in contact with several objects, the lateral forces cancel themselves out and the snake moves forward. The wave-like snake tracks created are a result of the snake propelling itself forward.

This is a snake undulating across the ground. With lateral undulation or serpentine movement, you will notice the places where the snake exerts a lot of force against objects in the environment.

The lateral undulation doesn’t leave a print behind as the rest of the snake’s body follows the path created by the head and neck. There is a lot of sliding friction involved.

With this movement, the snake basically moves straight forward without wave-like movement. As such the tracks formed are narrow and straight.

This movement is commonly associated with heavy snakes such as boas, pythons, and puff adders. However, this movement can be done by other snakes. With rectilinear movement, there is little bending of the body. The snake bends only when it needs to change direction.

The snake moves by alternately lifting the belly scale up, pulling them forward, then downwards, and finally backward. The snake crawls forward on the ground.

The snake drags its body forward over the ground. As you can see, there is a lot of static friction involved in this type of movement unlike with sidewinding and lateral undulation.

Both sidewinding and lateral undulation requires the snake to move from side to side.

As mentioned earlier the tracks here are straight. Because the snake drags itself forward in a straight line, you won’t find belly scale prints on the substrate even if it is a fine substrate.

This is unlike sidewinding which leaves behind belly scale markings on the substrate if it is fine enough.

This is a movement unique to snakes. This movement creates tracks that are perpendicular to the direction in which the snake moves.

As you can see in the picture above, the blue lines are the tracks that the snake leaves. The tracks resemble sine waves with straight segments that slope. While the tracks left by a snake that is sidewinding are easily recognizable, most snakes do not leave such tracks.

Snakes use this locomotion type when moving across loose substrates such as desert sands. Some caenophidian snakes are known to sidewind on even smooth surfaces.

Desert snakes normally move this way. This ensures that the snake makes minimum contact with the substrate.

As you may have figured out, desert sands can get very hot, scorching hot. It is essential that contact with the desert sand is kept to a minimum.

This movement is used on smooth surfaces and as such snake tracks created by this movement are quite rare. With this movement, the snake undulates irregularly as it tries to escape quickly.

The snake bends its body irregularly; the snake pushes the tail against the surface at different points as it attempts to move the center of its mass. When in a substrate, this movement creates wide broad tracks as the snake pushes its body in wide undulations.

What is the most common snake track that you will come across? 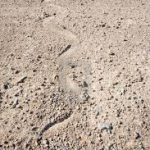 The serpentine or lateral undulation is the most common movement with snakes. This movement leaves a wavy track like this one.

What track does a snake leave when not moving? 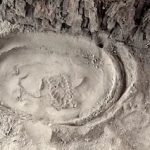 When at rest snakes do leave tracks. Snakes curl up into a ball when resting.

The track left behind resembles a circular crater. This should be a few centimeters deep. This crater shape is commonly created by rattlesnakes.

What do you do when you notice snake tracks?

If you are certain that the snake is still in the vicinity, you can contact a professional snake removal service.

Whether the snake has venom or not, they are also seen as a pest to gardeners or pet owners.

If you are unsure of whether or not the snake is around but you don’t want the snake visiting your yard or garden, then there are measures you can take to keep them away.

You can even plant snake repellent plants such as the prickly pear cactus (Opuntia), yucca plant (Yucca gigantea / Yucca aloifolia), or the snake plant (Dracaena trifasciata) around your home and in your garden or yard.

Snakes live in burrows so you may want to destroy burrows around your home or in your yard. However, you need to be careful when doing this as the burrow may belong to a threatened species and it can be against the law to destroy the burrows of such animals.

For instance, in most parts of the United States, it is against the law to destroy burrows created and inhabited by gopher tortoises.

Many people find snakes terrifying or fascinating. Regardless of the group you fall into, being able to identify snake tracks can help you decide your next course of action.

If you think you have a snake in your home, yard, or garden you may want to contact a snake removal service. There are five main snake movements.

These are concertina movement, which leaves disjointed tracks which cover a wide area; rectilinear locomotion, which leaves a straight line; side-winding where the tracks are perpendicular to the direction in which the snake is moving; lateral undulations create a continuous wavy track; and slide pushing creates broad wavy tracks.