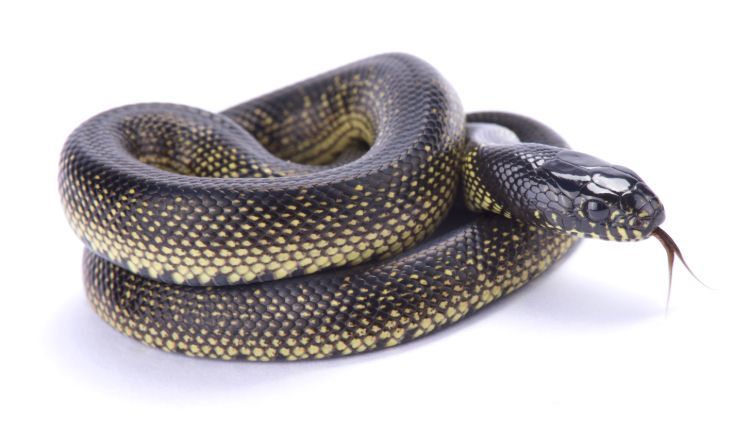 The adult L. g. nigrita is usually 106 to 132 cm (3.5 to 4.3 feet) long and weighs 1300 grams (3 pounds). The coloration of this snake is glossy rich black. This even blackness gives this subspecies its scientific name. Both the male and female of this species are alike.

This species is mostly found in arid regions such as the Sonoran desert. They are also found in the rocky and vegetative regions of northern Mexico, southern Arizona, and northwestern Sinaloa.

Is a Mexican Black Kingsnake Venomous

No, they are constructors and are non venomous snakes.

In the wild, the Mexican black kingsnake feeds mostly on southern desert horned lizards, rats, frogs, and house mice. They are not poisonous and rely on asphyxiation to kill their prey.

You must house an adult kingsnake in a large terrarium. While hatchlings can be housed in 10-gallon enclosures, adults need to be housed in enclosures with a capacity of 40 to 60 gallons.

The enclosure must not be placed near a window that receives direct sunlight as this may cause the terrarium to overheat. Overheating can lead to the eventual death of the snake. Since kingsnakes feed on other snakes, you cannot house them with other snakes.

A deep layer of aspen shavings or bark can act as a bedding for your snake. Pine and cedar shaving are toxic and as such, they aren’t suitable bedding material. You need to ensure that all decorative objects such as wood, plants, and rocks placed in the enclosure are nontoxic and clean.

A heat lamp such as the 60W Ceramic Heat Emitter or an under tank heater can be used to regulate the temperature of the habitat. I recommend a heat pad and thermostat combo such as the iPower Reptile Heat Pad and the Century Digital Heat Mat Thermostat Controller.

It is important that the right level of humidity is provided. Failure to do so can lead to death or pulmonary infections in the least. A humidity level of 40 to 60 percent is advisable.

This is usually the humidity level of most rooms. Providing a bowl of water is necessary as they will often soak in it. Also, since they tend to defecate in the water, it has to be changed regularly.

The bowl also needs to be disinfected. Because of their habit of soaking in water, kingsnakes can easily tip their water bowls if it isn’t heavy. A ceramic bowl, which is heavy, will help prevent the snake from tipping the bowl.

Feeding your pet should not difficult. Mexican black kingsnakes can feed on pink mice from the moment they hatch. Frozen pink mice are easy to find in most pet stores. The mice must defrosted to room temperature before you feed it to the snake.

Younglings can be fed larger mice. The mouse you feed the snake must be no bigger than the widest part of the snake. While kingsnakes love to feed during the warmer seasons – spring and summer, they feed less during the fall and the winter. They may even stop feeding during the winter. This is normal.

Kingsnakes reach adulthood when they are between 2 and 4 years old. As such, they will not need to feed as often. The feeding regime may differ from individual to individual usually dependent on size – kingsnakes that are four feet or more need to be fed at least thrice a week.

On average, you must feed them once or twice a week. The snake needs to be fed enough so that they are well rounded. If the outlines of backbone and ribs show then they need to be fed more often.

It is important that you feed the snake only pre-killed food. Live mice and rats may not be healthy as they may be infested or diseased. Also, live prey can attack the snake if the snake doesn’t want to eat – this happens when it is winter or the snake is preparing to shed.

Although they tend to hunt in day, they are diurnal in nature. They can be tamed through gentle handling. Members of the Lampropeltis getula species are solitary by nature.

Daily contact is necessary to establish trust with your snake. Once they are comfortable around you, you can take your snake around the house. You need to be careful, as they are quick to flee when they feel threatened.

If the kingsnake coils around your arm or neck, uncoil it by grasping the tail and unwrapping the snake from around you.

Hatchlings are born with the innate ability to fend for themselves. Adults reach sexual maturity between ages 2 and 4. Mating occurs from March to August, yearly.

Adult females can lay up to 24 eggs per season, but they usually lay about 10 eggs per season. Incubation usually takes between 50 to 60 days. Because this species is relatively easy to breed, there is no need to obtain a wild member of the species.

Common health problems include snake mites, respiratory infections such as pneumonia, mouth rot, and scale rot. If your pet snake is afflicted by any of these diseases, it is wise to contact your vet.

In addition, when you first acquire your snake, you have to collect the fecal matter and have it examined by an experienced vet who will test it for worms.

Where to buy a Mexican Black Kingsnake

The predators of the L. getula include larger snakes, hawks, raccoons, opossums, owls, coyotes, foxes, feral cats, and alligators. When threatened the kingsnake will hiss, strike, bite, pose and flee.

However, they prefer to flee. They will also spread a pungent musk. Their glossy black color allows them to blend into their environment when hiding from predators.

Although the native Florida kingsnakes are listed as species of concern on the U.S. Federal list, the rest of the species have no special status. On the IUCN red list, the species is classified as of least concern.

Mexican black kingsnakes are great pets for beginners as they are easy to care for; however, it is important that they are kept in a clean environment. They can easily be handled and are not poisonous as with all other kingsnakes.

However, it is important to be careful when handling them as they are quick to flee when threatened. These snakes can be found in many pet shops so they are easy to find. If you have any comments on caring for the Mexican black kingsnake, we would love to read them.