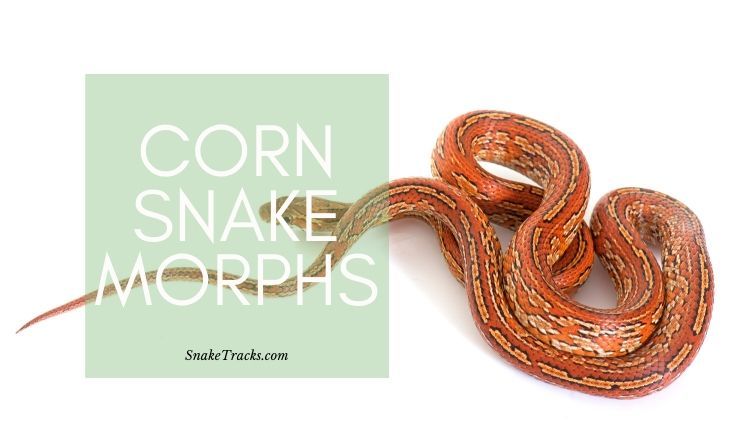 All About Different Corn Snake Morphs?

There are a ton of different corn snake morphs out there. Below we have 38 of the most popular types so you can easily choose your next one.

Their heads are also distinctive, usually having dark vertical bars on the lips, an orange or red iris, and round pupils. Corn snakes are slender and range from 18 to 44 inches (45 to 112 centimeters), with the record at 72 inches (1.8 meters).

The name “corn” seems to have come from their coloring, which is usually reddish-orange or orange-brown. But still, there are different ideas about how the corn snake got its name: there is also the belief that the name comes from the fact that it can often be found in corn and other crop fields or that the name stems from the fact that corn snakes often live in barns where rats come to feed on corn and other grains.

You can read our corn snake care guide here for more.

What are the most popular corn snake morphs?

Corn snakes come in many different very cool looking variations. These variations are often referred to as morphs.

Even if corn snakes are naturally very pretty, many wild ones have attributes that muddy their beauty. Most often, it’s an overcoat or “dirty wash” of melanin (black pigment) distributed over the entire body, muting the reds and yellows.

Natural variation was the beginning of the process: that first aberrant morph -a simple amelanistic (albino)- erased it completely to leave a stunningly bright red-orange creature. Once pure albinos existed, it was only a short time before lots of other traits were discovered, and then combined, to produce the myriad corn snake colors and patterns seen today. In fact, nowadays there are about 700-800 different corn snake morphs.  The most popular are:

They are also called amelanistic corn snake, because of their lack of melanin, or black pigment.

They are a combination of the caramel and hypo genes. Their scale colors can be lovely combinations of tan, golden brown and grey with touches of yellow.

Sometimes referred to as “red albinos” these snakes do not have the dark pigment, showing bright color combinations of red, orange, yellow and white.

also known as “fires”, they are a combination of the amelanistic and bloodred genes.

This morph comes from the combination of the amel and stripe genes.

“Anerythrism” is the absence of the pigment erythrin, which produces reds and yellows. As these snakes do not have the red pigment, their scale colors are combinations of black and grey with some developing yellow just on the lower jaw-line/neck area.

These also lack red pigment and so, their scale colors are also combinations of black and grey with some developing yellow on the lower jaw-line/neck area.

Sometimes known as “granites”, these snakes are a combination of the anerythristic A and bloodred genes. The bloodred gene eliminates the belly checkers.

These are also a type of anerythristic corn snakes, which are mostly grey and black.

“Blizzards” are a combination of charcoal and amelanistic genes. Some mature to be solid white, while others may develop light yellow belly checkers and/or “lemon-lined” saddles.

They are stunning red corn snakes with no side pattern and little or no black outlining the saddles. The bloodred gene also eliminates the belly checkers.

They look beautiful with the deep red color in their skin and dark eyes.

also called “pink and green” snow corns, even if not all of them will develop green on them. Their scale colors may include shades of yellow, pink, green and white. They are snows that have been selectively bred for their pink coloring.

a combination of the caramel and amelanistic genes,  this snake is named after it’s beautiful, yellow coloring.

This morph is the result of a triple gene combination:amelanistic, caramel, and stripe genes. They show various shades of yellow and white belly.

They have scale colors that are shades of brown, golden caramel color, yellow and black.

They are a combination of both the caramel and motley genes having scale colors that are shades of brown, golden caramel color, yellow and black.

These corn snakes are homozygous for both the caramel and stripe genes, having scale colors that are shades of brown, golden caramel color and yellow.

Sometimes called “anery B”, these snakes don’t have red pigment,  and show grey and black scales. These corn snakes have a different eye color and less contrast between the ground and saddle color than the “anery A” corn snakes. Some do develop light yellow on the lower jaw line/neck area.

They come from a combination of  anerythristic, amelanistic and hypomelanistic A genes. They show gorgeous shades of orange, pink, yellow and white and some may even develop light green borders.

This breed is the combination of the anerythristic (anery A) and  hypomelanistic genes. The scale colors can include white, grey, brown and black.

These corn snakes showing various shades of brown and yellow come from the combination of the anerythristic (anery A), hypomelanistic (hypo A), and stripe genes.

When adding the hypo gene to a “normal” corn snake, some of the black pigment is taken away. So, the black is reduced and the colors are lighter/brighter than those found on a normal corn snake.

These snakes were created by combining both the hypomelanistic genes (that remove some of the dark pigment which lightens the bloodred color)  and bloodred genes (that eliminate the belly checkers).

These corn snakes are a combination of three genes… lavender, hypomelanistic and stripe. Their color can be shades of lavender and a “pinkish” lavender.

Originally called “mochas”, this morph was first produced in the 1980s, as the result of breeding a snow corn snake with a wild-caught female.  Hatchlings can vary from a brownish to more of a lavender color, while adults can vary from shades of greyish lavender to a very colorful lavender with hints of peach.

Also known as “plasma corn snakes” they are a combination of the lavender and bloodred genes. Scale colors are various shades of lavender with some having a peachy ground color.  The bloodred gene also eliminates the belly checkers.

These snakes have been selectively bred for it’s coloring. Miami corn snakes are typically described as a silver snake with burnt orange blotches. The saddle colors can range from a brown to a reddish-burgundy with ground colors of tan to silverish-grey. Some may develop touches of orange.

They are called Miami corn snakes because, well, they are local to the Miami-Dade county in Southeastern Florida.This morph has one of the most prominent silver base colors of any of the morphs listed here.

Also known as “classics”, they have scale colors like those corns that are found in the wild, that is, their scale colors can be combinations of brown, orange, red, golden yellow and black.

This morph was originally bred from corn snakes caught in South Carolina.

They are a combination of the lavender and amelanistic genes. Much like the Opal gemstone, their adult colors are usually pinkish white with shimmers of darker pink and peach type colors.

They have selectively bred amels for the nice, wide borders. Their scale colors can be combinations of red, orange, yellow and white. As adults, the border colors can vary from white to light green.

They are a combination of the amelanistic and anerythristic (anery A) genes. As hatchlings, most snow corn snakes look similar, but as they mature, their colors vary and can include shades of yellow, pink, green and white.

they are a combination of the amelanistic, anerythristic (anery A), and motley genes. As happens with Snow corn snakes, as hatchlings, most Snow Motley look similar but as they grow, their colors include shades of yellow, pink, green and white.

They are a combination of the amelanistic, anerythristic, and stripe genes. As they mature, their colors  can include shades of yellow, pink, and white.

They are basically amel motleys that have been selectively bred for their stunningly bright colors.

While the sunkissed gene is considered to be a hypomelanistic gene (hypo C),  sunkissed corn snakes usually have a distinct type of head pattern with square-shaped saddles.

These corn snakes have two co-dominant genes… ultra and amel.

Corn snakes are one of the best pet snakes to own; they are extremely friendly  (hence their popularity as beginner pet snakes), they require low maintenance,  most don’t grow too large, and are generally easy to handle and like to be held.

On top of it, if you are considering buying a corn snake as a pet, you have a ton of different cool corn snake colors to choose from, that you can obtain for a reasonable price!!!