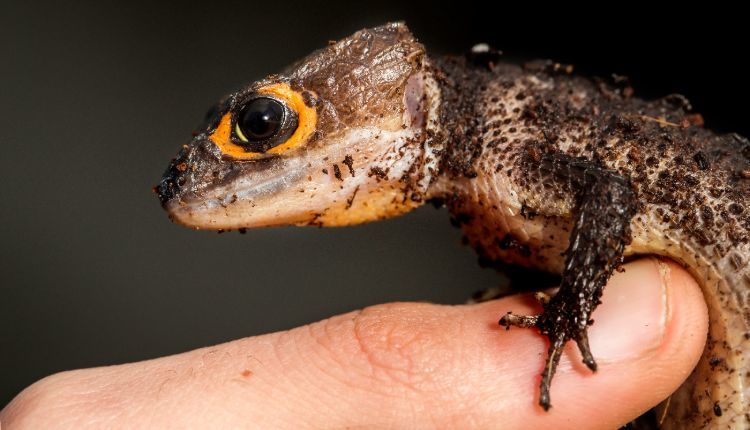 Red-eyed crocodile skinks are majestic looking skinks. The amazing red or orange rings around their black eyes make the crocodile skink quite the charmer.

These popular and amazing crocodile-looking creatures are quite shy and make for a desirable exotic pet.

Growing at no more than 25 cm long, the red-eyed crocodile skink has a stout body and legs, thick skin, and bony scales. Crocodile skinks are dark brown dorsally and laterally, with a creamy underbelly of a crocodile.

It got its name from the visible four rows of dorsal, backward-curving keeled scales. Each tapers to a point and resembles that of a croc.

You can find it residing in the dense, humid, tropical forests or humid bush areas near water. Amazingly, in some locations, they’ve adapted to live in human-populated areas such as coconut plantations, among piles of coconut husks.

These crepuscular lizards are active mostly at dawn and dusk, hunting for small insects and other such invertebrates. Crocodile skinks are also decent swimmers.

These fascinating little skinks spend most of their time on the damp forest floor foraging for food and looking for shelter under the forest debris, often near water.

Red-eyed crocodile skinks are one of the few known species of skinks capable of vocalizations when in distress, usually when they feel threatened or are defending their offspring.

Crocodile skinks also tend to freeze and to play dead when spooked and even when being handled.

Mature coloration comes at about 6 months of age for a juvenile crocodile skink. Females who have only a single working ovary, lay one egg at a time, once the first egg is laid others are produced at between 65 to 70-day intervals.

A distinctive trait for male crocodile skinks is the small pores called volar pores under their feet. Their sex can be identified by examining these white pads or pores on their hind feet.

Floor space is more important than height for a crocodile skink’s enclosure. Most recommend at least 30″ x 12″ tank or an 18″ x 18″.

An adult pair may be comfortable in a 3-foot-square aquarium. Check the Hagen Exo Terra Short All Glass Terrarium for options.

3 to 6 inches of substrate will suffice if plants are used in the decor. They are not huge climbers but will climb low-lying branches.

The substrate should always be moist. Crocodile skinks spend most of their time on the ground, which they dig into, creating nests between the substrate and the soil.

Red-eyed Crocodile Skinks are tropical lizards and come from moist, cool areas where daytime high temperatures average at 81 degrees and nighttime low averages at 73 degrees. A heating pad is not necessary for this pet lizard unless your house gets extremely cold.

Humidity levels are above 70 percent year-round in the crocodile skink’s natural habitat so keeping it between 70-95% is recommended. A glass top cover for the enclosure helps with humidity. Also, consider buying a plastic tub for your pet crocodile skink to.

Crocodile skinks are crepuscular and have not been known to bask in the wild. So, some say UVB lighting is optional and not necessary. Some, however, do believe that a basking light or a UVB light is necessary, or that both basking and UVB lights are necessary.

Whichever way you decide about lighting, remember that crocodile skinks fare better with cooler temperatures. Too much heat can be dangerous for this pet lizard. So keep basking and heating light exposures to a minimum and at low levels, if ever you use one.

Red-eyed crocodile skinks are mostly insect eaters. Their diets consist of a variety of small insects, grubs, roaches, waxworms, and mealworms. A bunch of worms and all sorts of feeder bugs are accepted.

Use a small dish, like the one from Zoo Med, when feeding. Also, give calcium supplements like Rep-Cal calcium with vitamin D3 powder. These should be added at every other feeding with their regular food.

Provide a water dish for drinking and soaking. Clean regularly.

Red-eyed crocodile skinks may have the look and demeanor of a dragon. But, they don’t come with the perceived personas of one. They are not fierce nor imposing. Crocodile skinks, also, are not fans of being handled.

These shy, exotic skinks are mostly regarded as display animals. They will often vocalize in distress and may try to escape or play dead when being held. They will usually be stiff and quiet.

Crocodile skinks are easy to hold since they tend to remain motionless and play dead in your hand. Therefore, frequent handling is not recommended as it stresses them out. If a good environment is provided they can be quite active, even during the daytime.

Crocodile skinks in captivity are known to live for a maximum of ten years.

Very little is currently known about their common diseases and parasites.

There are several things to look for when taking care of crocodile skinks. Examine the skink for any parasites, wounds, and deformities. Dull-looking eyes are a sure sign of illness and/or dehydration. Observe the Red-eyed crocodile skinks behavior, they should be very alert.

If there is a cause for suspicion, a fecal exam is recommended ASAP. Look for parasitic worms and other harmful micro-organisms. Measures are metronidazole (Flagyl) for protozoans, fenbendazole (Panacur) for roundworms and nematodes, and prazaquantel for flatworms.

A common disease for captive reptiles is Metabolic Bone Disease, usually caused by a lack of calcium and/or vitamin D3 in the diet. This can be easily prevented by dusting every second meal with a mixture of calcium powder and vitamin D3 supplements.

Though crocodile skinks are popular, they are still quite exotic. Price ranges from $150-$300. Expos may have these from time to time. Online captive breeders are usually your best bet.

According to IUCN, there are no known specific conservation measures in place for this species.

Research is needed to clarify the taxonomic validity of this species, and if valid to clarify its distribution.It is unlikely that any major threats are impacting this species.

Red-eyed crocodile skins are amazing, majestic, and exotic little creatures that make for an awesome display pet. Small yet solidly built, these skinks are relatively easy to care for and truly entertaining to observe and manage.

Since they don’t like being handled, the crocodile skinks may not be your best choice of pet for very young kids who like to actively play with pets.

This tiny crocodile looking skink is fascinating and more distinctive compared to other skinks. Thinking of grabbing one of these marvelous skinks from an expo or captive breeder? Leave a comment below and tell us your opinions and experiences.