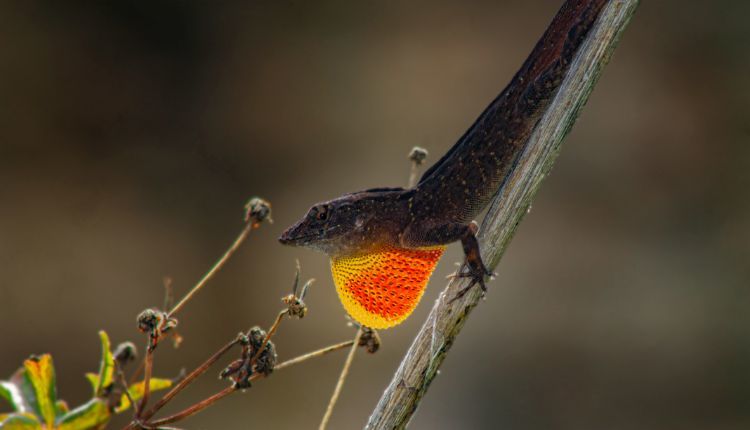 All Hawaiian Lizards are common ones which were introduced species. One lizard that was native to Hawaii, the cooper striped blue-tailed skink, also known as Hawaiian skink (Emoia impar) was declared extinct in 2013 but the last confirmed sighting in the state of Hawaii was on the Na Pali coast of Kauai in the 1960s.

The species was once common throughout the Hawaiian Islands and is still found on other island groups in the tropical Pacific.

The only native reptiles of Hawaii include all the species of sea turtles that can be found in Hawaiian waters and the yellow-bellied sea snake (Pelamis platurus). All the other lizards, turtles, and amphibians living in the islands today are all introduced species.

What are the most common types of lizards found in Hawaii?

How were Common house geckos introduced in Hawaii?

It’s believed that they found their way to Hawaii through cargo ships in the early 1800s.

How do Common house geckos look?

These geckos are transparent looking and known to hunt mainly at night.

What do Common house geckos eat?

They feed mainly on fruit flies and other small insects.

What ecological impact did they have on the environment?

This fierce and territorial insectivore is what Sean McKeown, author of A Field Guide to the Reptiles and Amphibians in the Hawaiian Islands, calls a “Supertramp”: a generalist that prospers in a variety of different habitats.

When super tramps move into a favorable area, they often spread rapidly. Throughout the 1970s and 1980s, writes McKeown, mourning and stump-toed geckoes were the most common lizards around lights at night on Kaua’i.

That has since changed and now the house gecko is by far the most abundant gecko in urban and suburban Kaua’i as well as on all the main islands.

It’s even managed to colonize barren Kaho’olawe. They’re still spreading at this point and time and it is unknown what impact they may eventually have.

Remarks: these lizards are not poisonous but are aggressive and territorial.

They are also known as American anole and red-throated anole.

How were Green anoles introduced in Hawaii?

They are native to the Southeastern United States and were first introduced in the 1950s due to a rapid increase in demand in the pet trade. They are now found in Honolulu, on Kauai, Maui, Molokai, Lanai, and the Big Island.

Males have a flap on their throat that is called a dewlap that can be extended to attract a mate or displayed against a rival.

Where can Green anoles be found?

They can mostly be found sunbathing on rocks or scavenging for food in gardens. They seem to stay in areas with high humidity and near plants with large leaves where they can bask.

What do Green anoles eat?

Length: They grows between 5-9 inches in total length.

Remarks: While they are not poisonous they have been known to bite if you manage to actually catch one.

How were Brown anoles introduced in Hawaii?

They are originally native to Cuba and the Bahamas and probably came to Hawaii as a stowaway on some plants or via the pet trade. They were first seen in 1980 on Oahu.  Now they are found in Hawaii on Kauai, Oahu, Maui, and the Big Island

Like the Green Anole males have a flap on their throat called a dewlap that can be extended to attract a mate or display against a rival.

According to an article in the publication Bishop Museum Occasional Papers, in the Pearl Harbor area, there is a population of this lizard that has the unique feature that all of them have rusty orange heads.

It’s possible these Pearl Harbor orange-headed brown anoles were a separate introduction to the island most likely from the pet trade since orange heads would be attractive as pets.

Where can Brown anoles be found?

They can be found on stone steps and rock walls sunning themselves, on sidewalks, canals, yards, shrubs, and planters. Usually, they hang out on shorter plants and the ground.

What do Brown anoles eat?

They eat just about anything they can find, from small insects such as crickets and cockroaches to spiders and even smaller lizards. The Brown anole eats the same things as Green anoles and both will eat each other’s young.

Length: They grow to about 5 to 8 inches in total length.

Remarks: Brown anoles (as well as green anoles) can detach a portion of their tails when pursued or captured and that tail will continue to move, hopefully distracting what or whoever was trying to catch it. This allows the anole to escape. The tail will regrow, at least most of it.

How were Gold dust day geckos introduced in Hawaii?

Gold Dust Day Geckos are native to Madagascar and small islands off the coast of East Africa.  According to McKeown the gold dust day gecko arrived via a University of Hawaii in the 1970s.

It seems that a student released just eight specimens in upper Manoa Valley, a lush tropical valley with plenty of plant and animal matter, and enough rainfall to encourage the growth of a variety of insects and introduced reptiles.

The establishment of a sizable population became known in 1979, at which time, island reptile enthusiasts captured specimens that had roots from the original eight, and released them in the neighborhoods of Diamond Head, Kahala and Aina Haina on the East side of Oahu, and in Kailua on the windward side.

They are known for their brilliant green color. They have bright blue eyeshadow, red markings across their nose and at the base of the tail, and a sprinkling of gold spots dusted along the back of its neck.

Where can Gold dust day geckos be found:

They typically inhabit various kinds of trees and houses.

These geckos eat a variety of food including spiders, cockroaches, ants, flies, beetles, small insects, and even other lizards (when they’re hungry enough). They have a sweet tooth and lap up nectar from flowers or juice from ripe fruit.

Length:   They grow to around 5-inches or so.

Lifespan: They can live for more than ten years in captivity.

Ecological impact: Even if it is not certain the impact that the introduction of the Gold Dust Day Gecko has had on the Hawaiian ecosystem, Gold dust day geckos are now considered an invasive species.

Since they can adapt to a variety of climates, they can live successfully on many of the Hawaiian Islands (Goldberg, S.R., and F. Kraus 2011).

How were Jackson’s chameleons introduced in Hawaii?

Native to Kenya and Tanzania they were first introduced to Hawaii in 1972 due to them being popular pets. They were released intentionally in Kāneʻohe with the hope of reducing predatory insects and snails.

They resemble miniature dinosaurs and are known to change patterns and colors. They are bright emerald green fading to a yellowish color on their undersides. They have binocular eyes and a sticky tongue that is much longer than its body.

Where can Jackson’s chameleons be found?

They can be found in the wet rainforest areas on Oahu, including Round Top Drive, Manoa Falls, and virtually any area in the Ko’olau mountain range where there are ample green trees, of which there are plenty.

What do Jackson’s chameleons eat?

These geckos eat a variety of food including spiders, small insects, fruit, nectar, and even other lizards (when they’re hungry enough).

Ecological impact: The introduction of Jackson’s chameleons to Hawaii (McKeown, 1991) is especially problematic because they prey upon insects native to Hawaii (Kraus et al. 2012), including Megalagrion damselflies.

They are a potential prey base for the brown tree snake and other snakes (dlnr.hawaii.gov).

Injurious Wildlife (Exhibit 5, Chapter 13-124). It is illegal to transport these animals between islands or to commercially export to the mainland.

Penalties can include a fine of up to $200,000 and a possible prison sentence. The Hawaii Department of Agriculture has an amnesty program allowing a person to turn in an illegal animal without prosecution

Remarks: The Jackson’s chameleon is the most popular of the introduced lizards in Hawaii, probably due to its resemblance to the dinosaurs.

How were Orange spotted day geckos introduced in Hawaii?

It’s speculated that it became established on Oahu in the mid-1980s and the species has also been found on the Big Island and Kauai.

They have a brilliant lime green color. In addition to the green body color and orange markings common to most day geckos, the Orange spotted day geckos most distinguishing feature is a wash of powder blue color on the back of the neck and shoulders.

They have expanded toe pads, immovable eyelids, and round pupils. The skin, which is covered with small, granular scales, is very delicate and easily torn.

Where can Orange spotted day geckos  be found?

They can be found on large trees and palms in suburban neighborhoods.

They feed on introduced insects and invertebrates that are not native to the Hawaiian islands. The orange-spotted day gecko is also known to feed on the nectar of flowers and juices of overly ripe fruit.

Ecological impact: It’s unclear whether Orange spotted day geckos will be able to invade Hawaiian forests, but they could be a problem for native invertebrates.

How were Madagascar Giant Day Geckos introduced in Hawaii?

They were introduced illegally to the island of Oahu.

They have a brilliant lime green color with one distinguishing feature. A red stripe from it’s snout to its eye.

Where can Madagascar Giant Day Geckos be found?

The Madagascar Giant Day Gecko can often be found inside the walls of peoples homes.

People who keep them as pets feed them crickets. On their own, in the wild, they will feed on insects, flower nectar, and fruits.

Ecological impact: They harm the environment according to https://www.hawaiinewsnow.com/story/7134531/beware-madagascar-giant-day-gecko-bites/

The biggest concern, is that these geckos compete with native birds for the same food source.

Remarks: Their teeth won’t tear your flesh but their powerful jaws can deliver a crushing blow.

Other species of lizards that are found in Hawaii are:

Legends of lizards, or mo’o, fascinated ancient Hawaiians. However, as mentioned earlier, all common types of lizards found in Hawaii at present, are introduced species (no terrestrial reptiles are native to the Islands).

It can be said that the above-described lizards likely caused a permanent change in the ecosystem of Hawaii as a whole. Before their arrival, many insect species – including tens of thousands that are unique to Hawaii – thrived on the islands.

For further reading check out A Field Guide to Reptiles and Amphibians in the Hawaiian Islands.

Why Do Chameleons Change Colors?