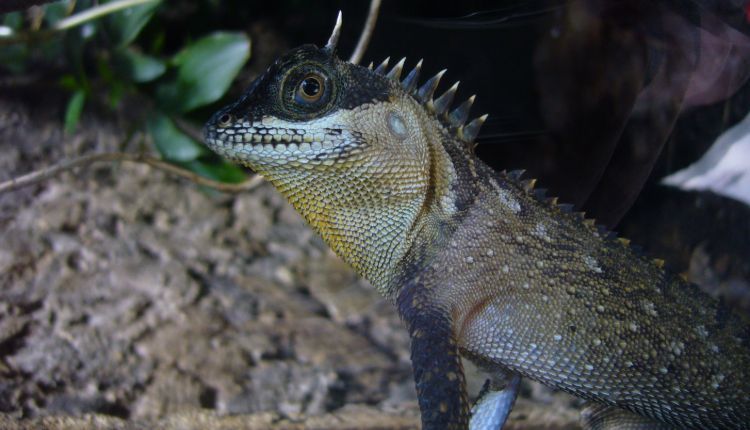 Mountain horned dragons make great pets both for the novice and the more experienced keeper. They have an amazing prehistoric look, great range of colors, inexpensive price and gentle disposition.

If they feel threatened, the can bit, but that just means you need to acclimate them to your presence and handling with regular interactions.Eventually the animal will learn that you are their food source and can be trusted.

While they aren’t considered to be difficult to breed in captivity, most specimens available at present in the US are wild-caught. Take this in the account for before you decide to buy one.

Captive bred is the way to go in our opinion, so if you can find a captive bred that would be the better option for everyone.

If you do decide to take a wild caught be sure to have it checked by your vet.

In the wild, mating takes place from mid-April until the end of July. Males will fight with each other for the ability to mate with females. After mating the male will go off to find another female.

Because of their territorial nature, while in captivity, care should be taken to avoid housing multiple mature males together. Doing this can lead to the occasional physical altercation, stress and a lack of appetite.

An easy inexpensive fix for this is to get a big huge water dish about the depth of their shoulders or elbows and twice the dragon’s length with an aerator pump and bubble stone.

The hotter the temperatures are, the more active the Mountain horned dragons are: then they need to find more food than when they aren’t moving much.

In the wild, Mountain horned dragons will bury themselves in the sand during the fall. As they blend in very well they are often able to hibernate there without being disturbed by humans or other animals. They come back out in the spring as the temperatures start to warm up.

They are seldom seen basking in the sunlight during the day on rocks, but when basking they tilt their body so that they can absorb the most heat possible.

At night they lie flat on the ground and will burrow up to 4 inches below the surface of the sand. This helps them to keep warm until the sun comes out the next morning.

The common name “pricklenape” refers to a row of dorsal spines that run down the back of the neck with smaller spines running along their back towards the tail.

They also have a dewlap, which is just a piece of skin that hangs below the lower neck and helps ward off predators by making them look bigger than they really are.

Each individual animal varies in color and generally have a grey background color with orange/red markings, with some being yellow. Another cool feature is that they have large orange/red eyes.

They are capable of controlling their color variation to some degree. They are not crazy good at this like a Chameleon but it is still a pretty useful trick.

Where Can Mountain Horned Dragons Be Found?

Mountain horned dragons can be found in humid forests in Burma, Thailand, Cambodia, and Vietnam.

What Kind Of Habitat Does The Mountain Horned Dragon Live In?

They are tree dwellers, spending most of their time above ground. They are very well adapted to living in trees and can climb “like monkeys.”

Mountain horned dragons thrive in humid climates, so once in captivity spraying or misting their tank daily is recommended. This can be done using a humidifier/mister.

What does the Mountain horned dragon eat?

Common foods in captivity include crickets, earthworms, silkworms, mealworms, moths, roaches, wax worms, and grasshoppers. They even like small spiders.

Horned dragons have a sit and wait for feeding style and will usually ambush their invertebrate prey when they least expect it.

Occasionally, the Mountain horned dragon will head to the shoreline to catch and eat fish, however, they don’t tend to put their head under the water.

In captivity, adults should be given insects 6-7 days a week. As a reference, you should feed your dragon as many insects as it can eat in 3-5 minutes.

How Long Does The Mountain Horned Dragon Live?

While little is known about the longevity of wild individuals, captive-born and raised mountain horned dragons can be expected to live over 8 years, with 5-10 years being a typical lifespan.

How Many Eggs Does The Mountain Horned Dragon Lay?

Females lay their first clutch of eggs about four months after mating.

They may lay up to four clutches total per year, separated by a month or two. She may deposit from 10 to 30 eggs each time.

The eggs are often covered with a layer of sand to help keep them warm and to keep predators away. Then the female will leave them and never come back. The young have to hunt and find shelter all on their own.

Is It Legal To Own A Mountain Horned Dragon As A Pet?

The U.S. Department of Agriculture has some say over the pets Americans can own. But individual states have their laws, too.

In most States, it is legal to catch and keep venomous snakes as pets, but only with a permit. In other states, it is entirely illegal to own them.

Hawaii has the strictest pet ownership laws because its ecosystem could be disrupted by invasive species. On the other end of the spectrum, five states don’t ban residents from owning exotic pets — even lions, tigers, and bears. Nevada, Wisconsin, Alabama, North Carolina, and South Carolina each have lax laws when it comes to pet ownership.

Where To Buy A Mountain Horned Dragon

Mountain Horned Dragons make great pets for beginner to experienced reptile owners; they are pretty docile. Like we mentioned above, they can bite if they feel uncomfortable or threatened. The good thing is that they are not poisonous, you just need to disinfect the wound if you get bitten.

In any case, before handling them extensively, you should allow them time in order to become accustomed their new home. Handling them little by little over time reduces stress and lets them get used to you.

You are a predator to your horned dragon until you show it otherwise! Once your dragon knows and trusts you, it will be content and will perch on your shoulder for hours.