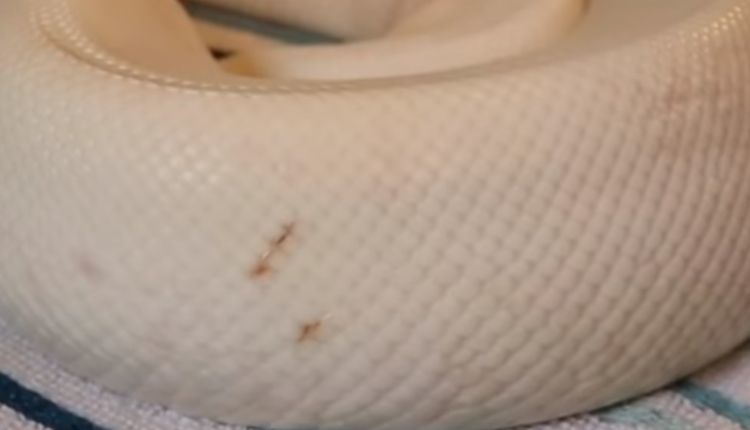 While snakes are among the hardiest pets you can have, they still have their health issues. One such issue is scale rot which is a term used to describe many forms of dermatitis among reptiles.

Additionally, scale rot is used to describe infections that result from skin abrasions and burns that aren’t treated properly. It is important that you have a reptile skin and wound care cream and Betadine available in your reptile first aid box.

However, the best defense against scale rot is a clean and sterilized enclosure as well as proper husbandry practices depending on the snake species. If a snake is already afflicted by scale rot, this article will help you treat it.

As with any health issue, the early the complication is discovered, the easier it is to treat. Early detection ensures the reptile barely suffers and treatment is least expensive. Here are the signs to watch out for.

While ventral scales are usually the first to be affected, the tail and any other areas can also be affected.

These are small fluid-filled sacs that appear on the scales of the snake. Blisters usually appear on scales with the most contact with the substrate. The fluid in the blisters is clear and yellowish.

Once the blisters are infected, they become red and oozes fluid. The entire area becomes swollen and the blister can rupture. The scales may even dislodge and fall off. Pus then leaks from the affected area once the snake sheds.

After the shed, sores/ulcers appear where the blisters are. Several blisters may combine to form infected blots of skin. If after all this, the blisters are still left untreated, the bacteria can enter the bloodstream and cause septicemia. This disease can kill snakes within days.

As scale rot causes blood to pool, the scales which have blood pooled underneath them become raised.

These are the three main signs to watch out for when it comes to scale rot.  The early you notice these symptoms the easier you can treat it. Once treated the skin should return to normal after a few sheds.

Scale rot is particularly common among captive snakes particularly boas and pythons. The leading cause of scale rot and other skin diseases is poor husbandry. This includes failure to maintain the appropriate temperature and moisture levels in the enclosure.

As you know, humidity is important for shedding and maintaining good health among snakes. However, if the substrate isn’t allowed to dry between misting, or if the snake doesn’t require moist substrate but the substrate is, it can lead to skin diseases such as scale rot.

This is further worsened if the damp bedding is contaminated with pieces of food and excrement. Snakes that like to submerge themselves in water are particularly at risk as they may fail to dry themselves properly after their bath. With such species, ensure the bedding is dry so they can properly dry themselves.

If the enclosure is clean, dry, and warm enough yet still scale rot plagues the snakes, then it is likely the snakes are suffering from vitamin A or C deficiency. Snakes are supposed to receive all needed nutrition from the preys they are fed. However, if the prey is of low quality, it may lack important nutrients.

Scale rots, when left untreated, can encourage the growth of bacteria such as Pseudomonas spp, which can lead to deadly diseases such as septicemia. As such, it is important that scale rot is treated as soon as possible.

Scale rot can be contagious. As such, it is important that affected snakes are quarantined in a separate enclosure until they recover. This enclosure needs to be lined with paper towels or newspaper.

This substrate dries easily and is easy to clean. If one snake has scale rot, then conditions in the terrarium, which is shared with other snakes, may not be optimal. Check the humidity levels of the enclosure and ensure it is clean and warm.

Treatment is dependent on the severity of the disease. For mild scale rot, you can easily treat it by sterilizing the enclosure and cleaning the blisters. Once the enclosure is clean and dry, and the blisters are properly treated, the snake should heal in no time.

First, you must remove snakes with blisters from the enclosure and place them in a dry environment with the right ambient temperature, good ventilation, dry bedding, and the right humidity.

Next, you should have a herp vet diagnose the snake through a physical checkup. If the scale rot is severe, antibiotic treatment is necessary to ensure harmful bacteria is destroyed.

However, in superficial cases where scale rot is caught early, antibiotic treatment is usually not necessary. In severe cases, topical treatment and medications such as silver sulfadiazine, iodine solution, and antibiotic creams are used to create blisters.

While the snake is in its temporary enclosure, you need to identify the conditions that need to be corrected so the health issue doesn’t occur again. This usually includes cleaning the enclosure. Remove all the objects in the enclosure including water dishes, hide boxes and decorations.

Porous objects such as wood should be thrown away and replaced with new ones. They may just be too dirty to salvage. Plastics and ceramics should be cleaned with a 5% bleach solution. The bleach should sit for about 10 minutes before you properly rinse the object with clean water and properly dry them.

Once the enclosure is clean, set it up once more with the new substrate. Until the snake is healed it is best to use plain old paper towels. They dry the snake easily after it has taken a bath in its water dish, and are easy to replace once they are wet.  Once all the blisters and discoloration disappear, you can switch back to any other substrate you use.

Treat the blisters on the snake with a betadine bath. This is useful, whether the case is superficial or severe. Get a large container such as a Rubbermaid. This should be large enough that if it is filled with water, the snake can submerge in and still breathe.

The container must have lid. Make several holes in the lid so the snake can breathe.  Pour lukewarm water into the container and add betadine solution. For every 10 parts of water, add 1 part of Betadine.

The water should be lukewarm, about 80 F in temperature. The solution should be high enough for the snake to submerge in without drowning. After the snake has soaked for about 30 minutes, remove it, and dry it using a towel or paper towels.

Place the snake back into its clean enclosure. Bath the snake twice a day until the blisters disappear.

Prevention Is Better Than Cure

As the old adage goes, prevention is better than cure. These words ring true when it comes to scale rot. How do you prevent this and many other skin issues?

Keeping humidity levels right is essential to preventing scale rot as we have mentioned several times. Depending on the snake, different humidity levels must be maintained. This is directly in relation to the snake’s natural habitat in the wild.

Snakes such as sunbeam snakes that live in swampy areas require humidity levels of 80 to 100%. Such snakes are rare among hobbyists and can be difficult to care for.

Even if you must mist enclosures of snakes that require high humidity, ensure the enclosure dries between misting.

With the help of a digital hygrometer such as the Habor Digital Hygrometer & Thermometer, monitor humidity levels and ensure levels aren’t too high or low.

Using the right substrate will ensure the snake is comfortable and the enclosure doesn’t get too damp. Substrates to avoid include soil/sand. These used to be popular in the past but are not the best. Sand is coarse and can harbor bacteria and fungi with ease. Cedar and pine shavings shouldn’t be used as they are toxic to reptiles.

A cheap and good alternative is paper. Newspaper and paper towels are effective and clean. If they get soiled, you can easily replace them. They may not be nice to look at but they get the job done. Additionally, you can easily spot parasites such as mites on them.

Another good alternative is reptile carpet such as the Zilla Reptile Terrarium Bedding Substrate Liner. They are easy to clean and use again. Once the carpet is dirty, remove it, clean it and place it back into the enclosure. They are quite popular of late as they look nice, are affordable and reduces back odor.

The last type of substrate are the loose ones such as calcium sand, coco coir, aspen shavings, Repti bark, and moss (peat and vermiculite). These are great for snakes that burrow. They hold moisture well, and absorb bad odor.

While scale rot can be a nightmarish health condition, it need not be. With early detection and treatment, you can easily conquer this common skin condition. Since the main causes of scale rot are high humidity levels and low temperatures.