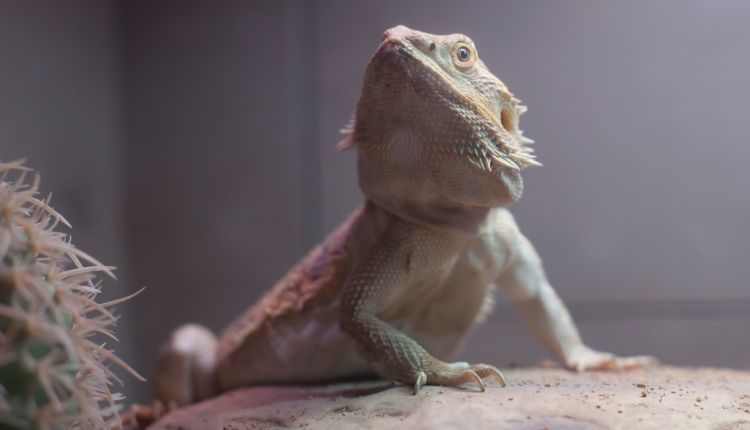 How to create a Bearded Dragon Setup

Creating the perfect bearded dragon setup isn’t too complicated, but there are some misconceptions about what the best is. Below is a step by step guide with a supply list of what you need to set everything up well so that your beardy can live a long and healthy life.

Bearded dragons are the common name for Pogonas, a genus of reptiles containing eight (some sources say nine or ten) lizard species. They are found throughout much of Australia in a wide range of habitats such as deserts, shrublands, and Eucalyptus woodlands.

They are land-based creatures that need plenty of floor space to freely move about, an aspect that should be considered when setting up their terrariums. However, they do not require much vertical space, even if they do enjoy climbing and they spend significant amounts of time on branches.

Check out the Bearded Dragon Care Sheet for a complete overview.

Introduced into the U.S. as pets during the 1990s, bearded dragons are a species that has gained much popularity as an exotic pet.

However, they’ve been bred in the United States for decades for the pet trade, and they come in a variety of color “morphs” not commonly found in the wild.  They have a hardy nature and are easy to care for when compared to other exotic reptiles.

The central bearded dragon, Pogona vitticeps, is the most common species to have as a pet.

Where does the name come from:

Bearded dragons are named after the “beard” of spikes under their chin that both males and females are equipped with.

When threatened, a bearded dragon will open its mouth, raise its chin, and puff out its beard to make itself appear bigger. This display may also be accompanied by a hiss.

In what has to do with the bearded dragon set up, there are primarily four steps  that should be followed:

Adult Bearded dragons can reach lengths up to two feet including the tail, so a terrarium that is at least about three times this length is ideal. This means a glass terrarium of at least 34 gallons in volume. A good choice is the Exo Terra Terrarium Kit, for Reptiles and Amphibians.

Generally speaking, the bearded dragon is a solitary animal. Male bearded dragons are usually housed alone, as they are very territorial. As they grow, they establish social hierarchies in which displays of aggression and appeasement form a normal part of their social interactions.

A dominant male will adopt a dominant stance and sometimes ready himself for a fight to attack a male aggressor to defend territory, food sources, or in competition for a female.

A newspaper is the more inexpensive, easy to clean, and very safe substrate to use, but should be replaced once a day.

Calcium sand and reptile carpets (i.e. Zilla Reptile Terrarium Liner) are the other options.  Calcium sand (two to three inches) will remind your Bearded dragon of the desert of his ancestors but is not a good option for younger bearded dragons.

Sand type substrates should be particularly avoided for baby and juvenile bearded dragons cause loose particle substrates can lead to digestive blockages (called impaction)  when swallowed. Impaction is a common culprit of death with pet bearded dragons.

Bearded dragons come from areas with high temperatures, and these temperatures will need to be replicated in their captive environment.

At the same time, Bearded dragons are ectotherms, meaning they’ll need both a reliable source of heat using a heat pad like the Zilla heat pad or similar, and a cooler area to spend part of their time. Just make sure to use a thermostat like the one from Zoo Med to regulate the temperature.

Bearded dragons love to bask out in the sun in the wild. You can reproduce such conditions by supplying a basking perch underneath a basking bulb like the Exo Terra Infrared Basking Lamp paired with a BetaZooer lamp stand.

For the bulbs you will need some fixtures and REPTI ZOO has a good option for that which includes a notification when it is too hot.

Lastly, temperature and humidity should be monitored. You can use a Zoo Med Digital Combo Thermometer Humidity Gauge for ongoing monitoring and use a laser temp gun for spot checking where the heat pad is. You don’t want the glass to get hot and burn your beardy.

PLANTS: Avoid using live plants as bearded dragons will eat them. It’s best to use fake plants like the below 3:

CLIMBING FACILITIES: they’re semi-arboreal and often can be found on fence posts and tree branches. Exo Terra has a forest branch that works well. You can use items found outside as well, but the issue there is that you dont know what parasites may be hiding within. You will need to treat it before using it.

HIDING PLACES: Also, provide your Bearded dragon with an ample hide box. Stress may occur if left out in the wide-open all the time. Bearded dragons need a place to hide during times when they feel unsafe. The Zilla Rock Den is a nice one, and it’s non-porous making it easy to clean.

If you want to spice it up a little more you can even add a hammock like this one from Zoo Med.

Lastly, a food and water dish can be purchased and added. It should be noted that you shouldn’t leave a water dish in the enclosure. The reason for this is that it will evaporate and raise the humidity of the enclosure.

Rather than giving a dish of water you can spray it’s food in the morning with water and also put your beardy in water(up to its elbows) every few days.

Watch the video below for more on how to provide the best setup for your beardy and what common mistakes should be avoided.

A Bearded dragon set up is not difficult when following the above mentioned four steps.

When getting a new bearded dragon it is best to have them set up fully operational before bringing it home for the first time. This allows you to adjust temperatures and lighting so it will be just right when you introduce your new Bearded dragon to its home. This will help reduce stress during the acclimation period.