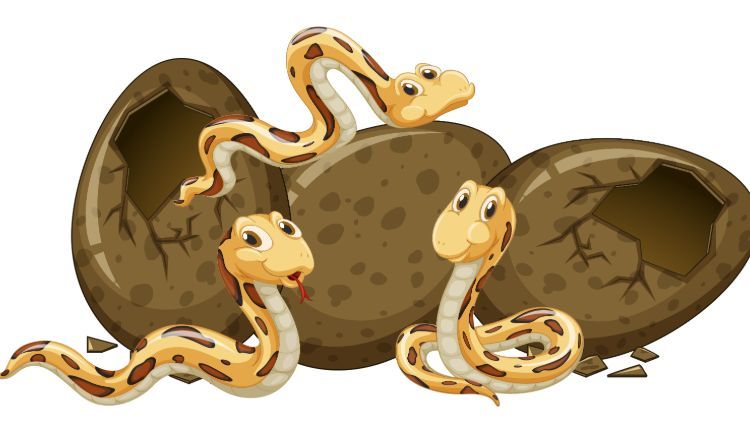 Do You Have A Pregnant Snake?

Is your snake pregnant? How can you know? In this article we will cover the different types of snake reproduction as well give you tips on how to tell if your snake is gravid.

Why Do Some Snakes Give Birth To Live Young And Other Lay Eggs?

Female snakes reproduce about once or twice a year; however, the methods of birth vary among species. There are in fact three basic ways female snakes give birth. These reproduction methods are known as oviparous, viviparous and oviviviparous respectively.

Most snakes hatch from eggs -from one to 100 at a time (this is called oviparous reproduction). Among the snakes that hatch from eggs, some like the Racer and the Coral lay their eggs, while some others like the King Cobras and some Pythons stay with their eggs.

Or the female holds eggs internally until they hatch with the babies wrapped in a membrane (this is called ovoviviparous). This last method is, in fact, a combination of the other two. Retention of eggs and live birth are most often associated with colder environments.

Although snakes use three different reproductive modes, all snakes employ internal fertilization. This is accomplished using paired, forked hemipenes,   which are stored, inverted, in the male’s tail. The hemipenes are often grooved, hooked, or spined to grip the walls of the female’s cloaca.

How To Tell If Your Snake Is Pregnant?

The easiest way to know if your snake is gravid is to visit your veterinarian, who can take X-rays or use an ultrasound to visualize your snake reproductive organs.

1. Look For Changes In Your Snake’s Body Proportion

A pregnant snake will become thicker in the area from the midpoint to the vent.

2. Look For Changes In Coloring

In snakes such as pythons, their coloring might change due to their reproduction cycle. However, this is not a singular indicator because their color could change during other stages of the cycle and not just pregnancy.

3. Look For Changes In Your Snakes Temperament

Even the snakes with the most docile natures may become instinctively defensive as they develop their young and guard their eggs.

4. Look For Changes In Your Snakes Appetite

Female snakes tend to avoid eating while they are pregnant. Some females will eat only smaller portions of food while pregnant, while some others won’t eat at all (like the Ball Python that rather prefers to wrap around the eggs to keep them warm instead of eating).

5. Look For Changes In Your Snakes Behavior

A sign that your female snake is developing a clutch, is that it exposes its underbelly in warm light.

Some Interesting Facts About Snake Pregnancy

Snake sperm, with some species at least, can remain intact for up to five years! The female snake has two pockets each is specialized for delayed or immediate reproduction. This means that the female can produce additional offspring without any further male contact.

There is a process known as parthenogenesis, in which the female reproduces asexually, that is, without fertilization (and individuals with the genetically identical to the mother are born).

Parthenogenesis is not necessarily a product of captive circumstances. The process has been documented in the wild and is known to occur within species where the female might not see a male for an extended time.

For example, Copperheads and Cottonmouth can reproduce by facultative parthenogenesis.

As incredible as it might sound, female snakes have control of their pregnancy, meaning they have control over whether they actually become pregnant after mating.

On top of it, the female snake can also control which fathers’ sperm she uses to fertilize her eggs. Female snakes can mate with many males and then choose among the sperm each time they reproduce.

If the female snake has mated with many males, her clutch of young could well be a mixture of offspring from a host of different fathers.

In many animals, males are larger than females, but for most snakes the opposite is true. Female snakes are physically imposing, so it is not surprising that they can overpower – and even swallow – their mates.

Last but not least, it is worth saying that size in snake females is also linked to increased fertility and bigger offspring, which are more likely to survive.  A 2016 study found that maternal body size can influence the young’s immune systems.

Males seem to be drawn to these reproductive benefits: they also prefer to court larger females. Of course, snakes don’t have good sight but during the breeding season, longer females happen to have higher proportions of pheromones in their skin.

How to take care of a pregnant snake?

Once you have confirmed that your snakes behavior is a sign of pregnancy, you will need to prepare a nest box and keep an eye on her growing body.

Keeping the right temperature is a must. During this developmental time, your snake may repeatedly move from basking to shade throughout the day.

Therefore, you should make sure that your female snake has a basking place with a temperature of at least 95 degrees Fahrenheit. This will ensure her comfort.

How Long Are Snakes Pregnant For?

The gestation period of snakes varies depending on the snake breed.

In viviparous and ovoviviparous snakes the gestation period takes a minimum of 3 months.

In oviparous snakes, the gestation period is generally 28 to 45 days.

The average incubation time for snake eggs is anywhere from 55 to 60 days.

What Happens Once Young Are Born?

There’s not much maternal care involved. Either way, the snakes are born as smaller versions of the adults (except for their proportionately larger heads) and are completely self-sufficient needing no parental care.

In captivity, it’s not unusual to get 100 percent survival of a litter of snakes. In the wild, the survival rates are much lower.

To find out whether your female snake is pregnant or just digesting her most recent meal, the only conclusive method is to check with your vet.

However, there are signs that strongly point out your snake might be pregnant. (the snake usually swells in the mid-to hind section of her body, she may bask more and her appetite may decrease.

Also, her body position may change, she may lie on her side or may coil more loosely than normal).

Once you have confirmed your pet snake is gravid, you should ensure her comfort, basically by conditioning the environment to her new requirements placing special attention on her temperature needs.